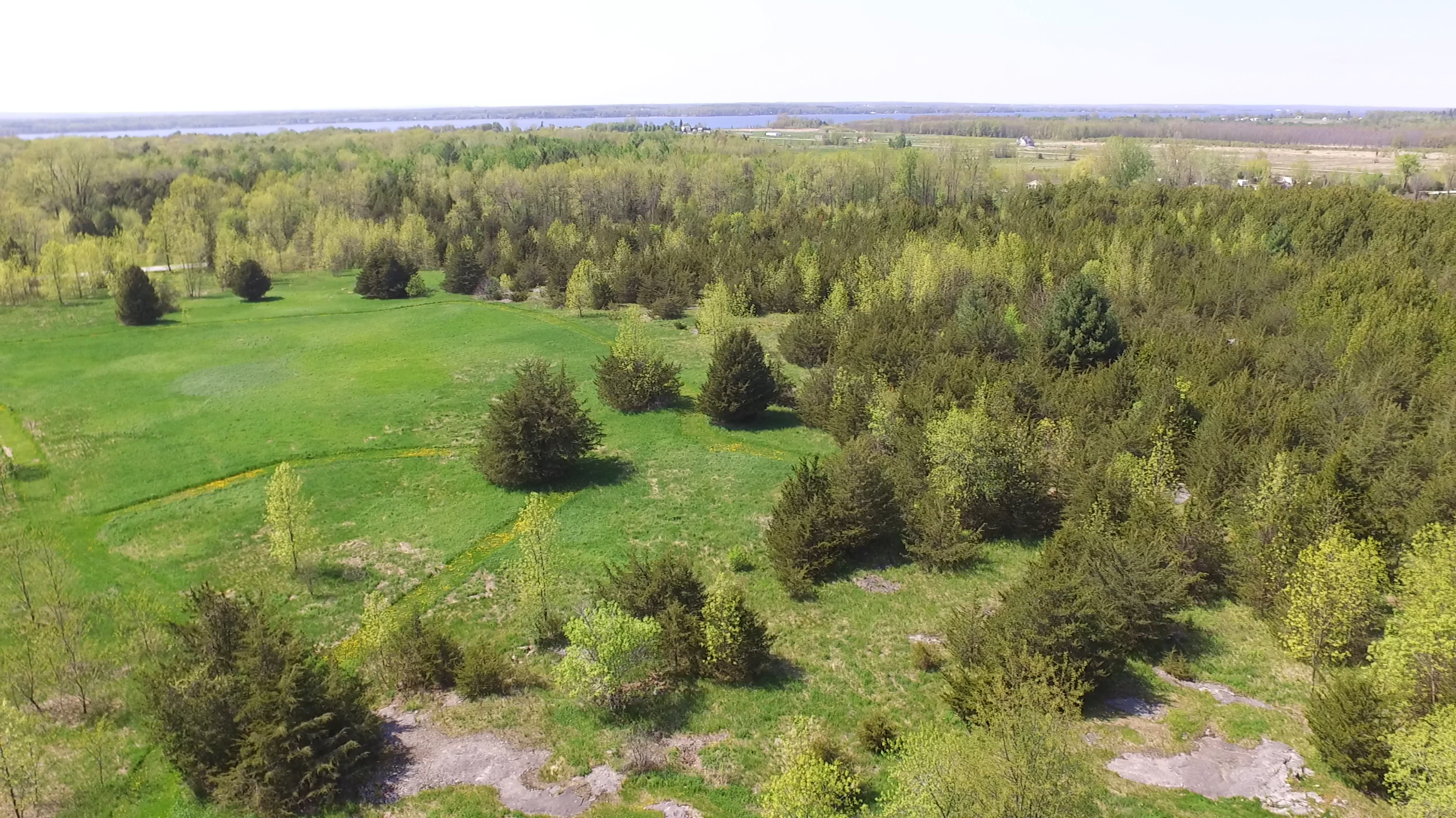 The Fisk Quarry Preserve was once the oldest working quarry in Vermont.
Outdoor Recreation at Our Preserves

All our walking trails are open. For the “Walk Through Time” (WTT) exhibits, go to the trail-head and look for the wood-frame-supported information panels, or small brown pickets labeled WTT. The WTT trail is almost a mile long and brings you back to the parking area.

We have just installed information panels for  our Fossil Discovery Areas.

Please start at the trailhead and follow the small green pickets to the various Discovery Areas. There are 7 Discovery panels over a distance of about 400 yards.  At the last one (#7) retrace your steps back to the Visitor Center.

The trails are open every day during daylight hours. If you choose to walk  the  trails of the preserve, please only walk with members of your immediate family and observe social distancing from other visitors, both in the parking area and on the trails.  Please use common sense to keep yourself, your family, and other members of our community safe.

The Goodsell Ridge Preserve and the Fisk Quarry Preserve are important sites of the Chazy Fossil Reef,  protected for education, research, and public appreciation.  They are owned by The Isle La Motte Preservation Trust with conservation easements co-held by the Lake Champlain Land Trust and the Vermont Housing and Conservation Board.  In 2009 these and several other sites received the designation of National Natural Landmark from the US Department of the Interior and the Department of Parks and Recreation.

Visitors  are asked to respect the rules of these protected sites which include no removal of plants, animals, or rocks from either of the preserves. Fossil collecting or damage to the rocks is strictly forbidden.  These are places for quiet walking, observation and learning, but not for vehicular traffic, bicycles, or other activities which may damage the fragile ecosystem and geological formations of the preserves.

The Goodsell Ridge Preserve
is an 83 acre Outdoor Museum

In all seasons of the year visitors can park in the designated area on Quarry Road and explore our:

*Nature trails which wend their way through every ecosystem of the preserve. 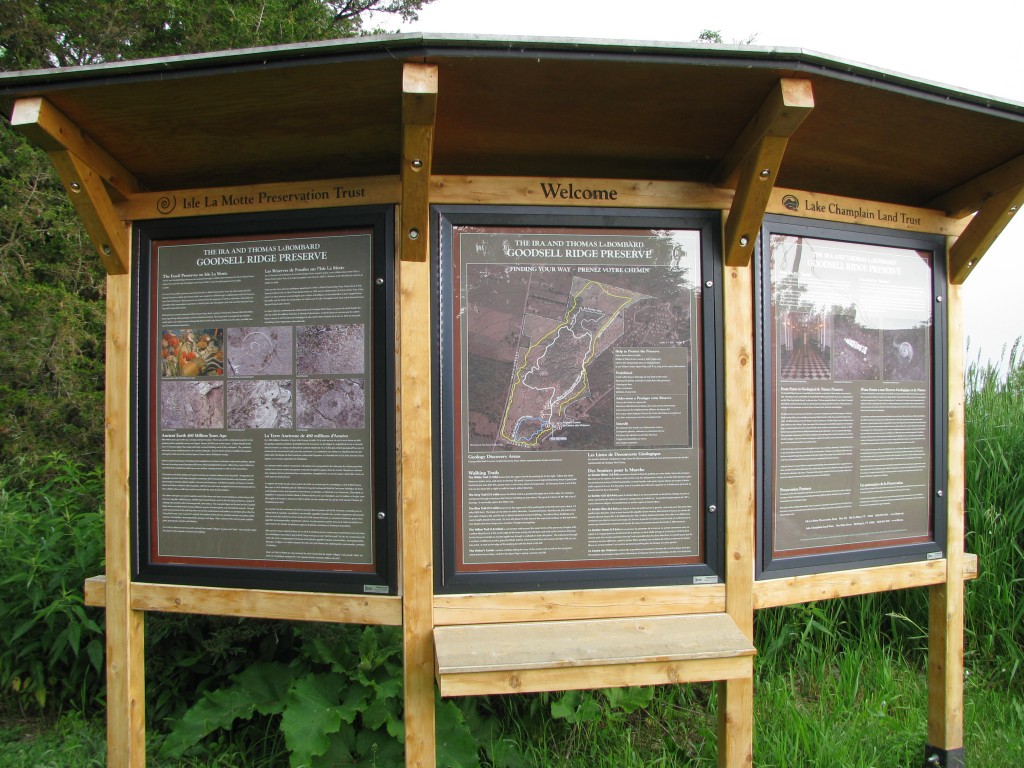 Kiosk at the Goodsell Ridge Preserve

From July 4th Weekend to Labor Day Weekend visitors can explore the Conservation Barn and Visitor Center and enjoy the Walk Through Time Trail:

The Conservation Barn houses fossil displays, interpretive text, a slide show depicting tectonic plate movement and an eight minute video - "The Oldest Reef"- telling the story of the Chazy Reef on Isle La Motte.  In the north room of the barn, artwork from Vermont artists supports our conservation mission.

Walk Through Time Trail
A world-class outdoor exhibit on which some 80 colorfully-illustrated panels  are set up along a 4,600 foot trail. They depict the scientific understanding of  the 4.6 billion year history of life on Earth.

Our fossil Discovery Areas are open year round

Six of the fossil areas feature interpretive signage that identify representative fossils etched in the reef rocks and describe relevant science concepts. The seventh area contains a massive boulder, carried by glaciers in the last ice age, twenty to thirteen thousand years ago.

This is a world class outdoor exhibit on which some 80 colorfully illustrated panels  are set up along a 4,600 foot trail. They depict the scientific understanding of  the 4.6 billion year history of life on Earth. 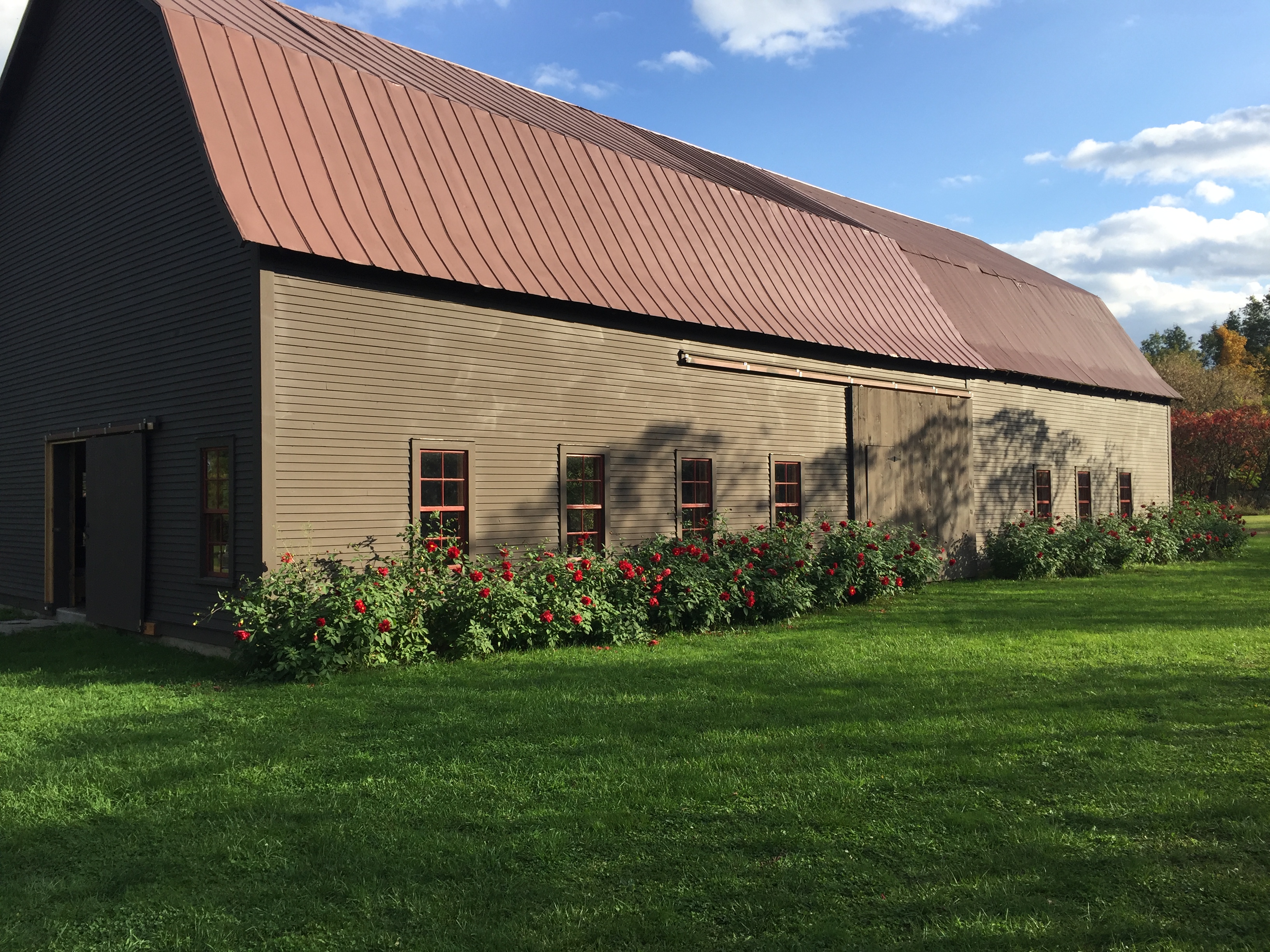 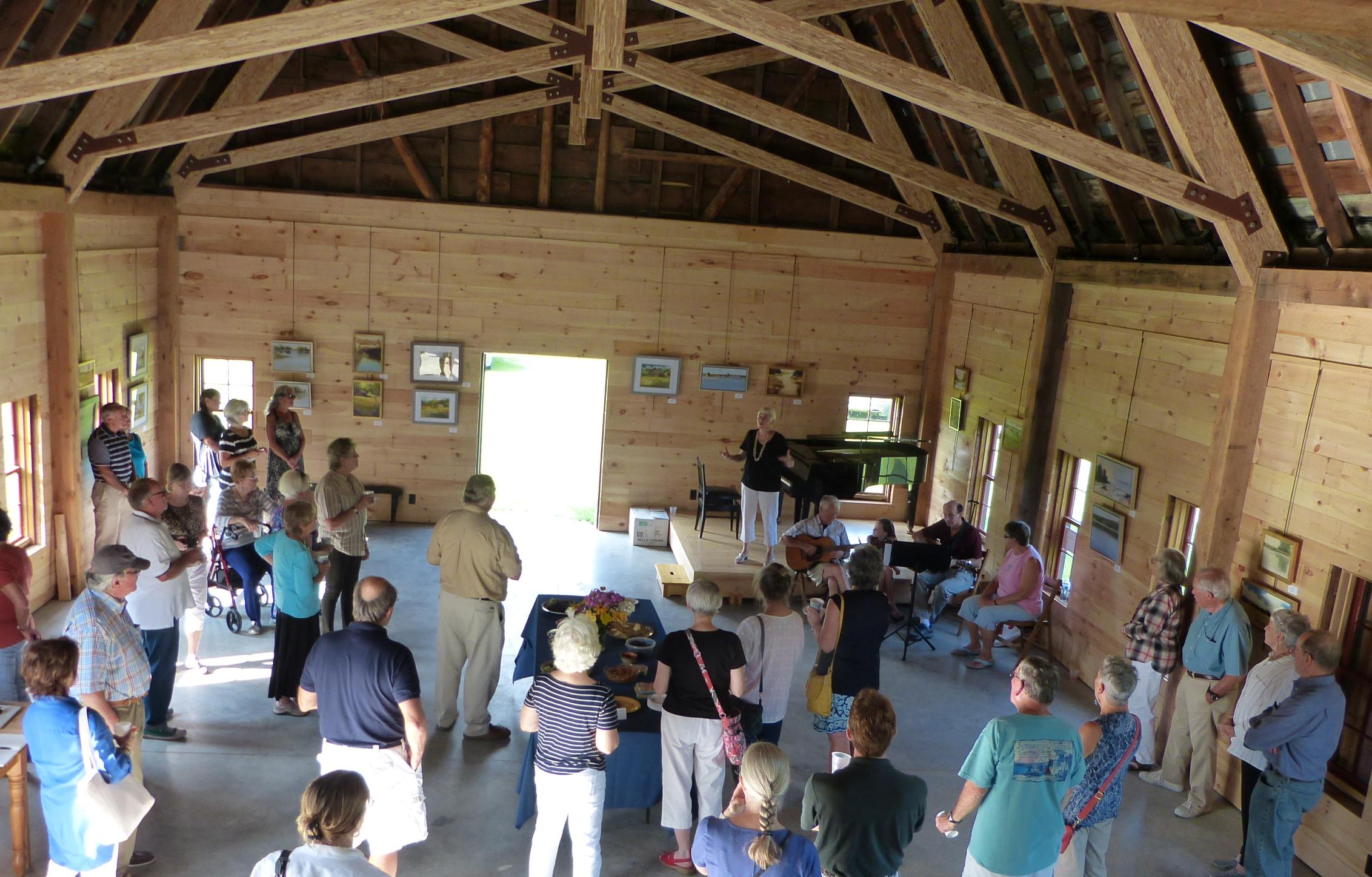 The North Room of the Conservation Barn serves for community gatherings and events. 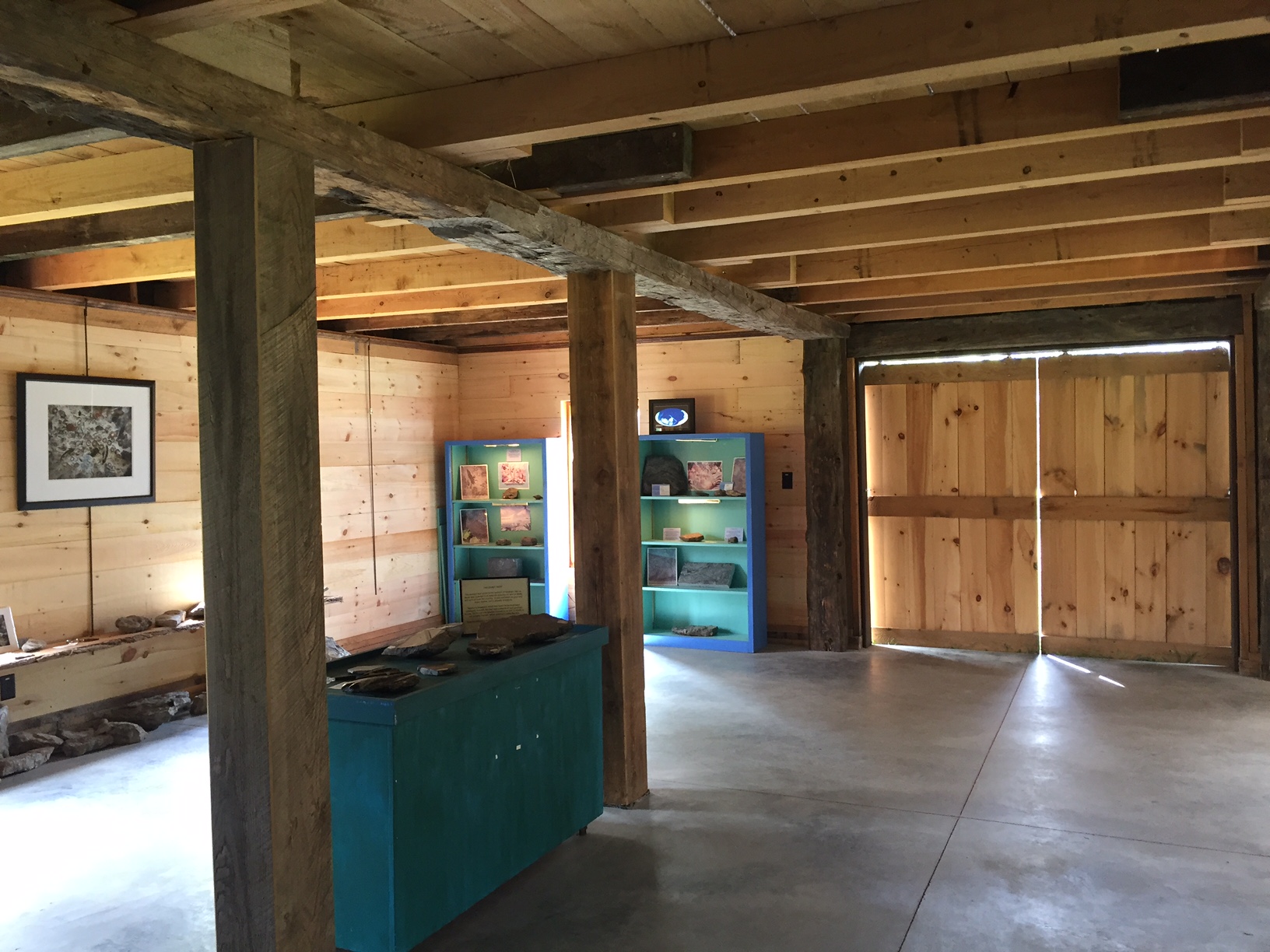 The South Room contains fossil displays, interpretive text and a video telling the story of the ancient fossil reef. 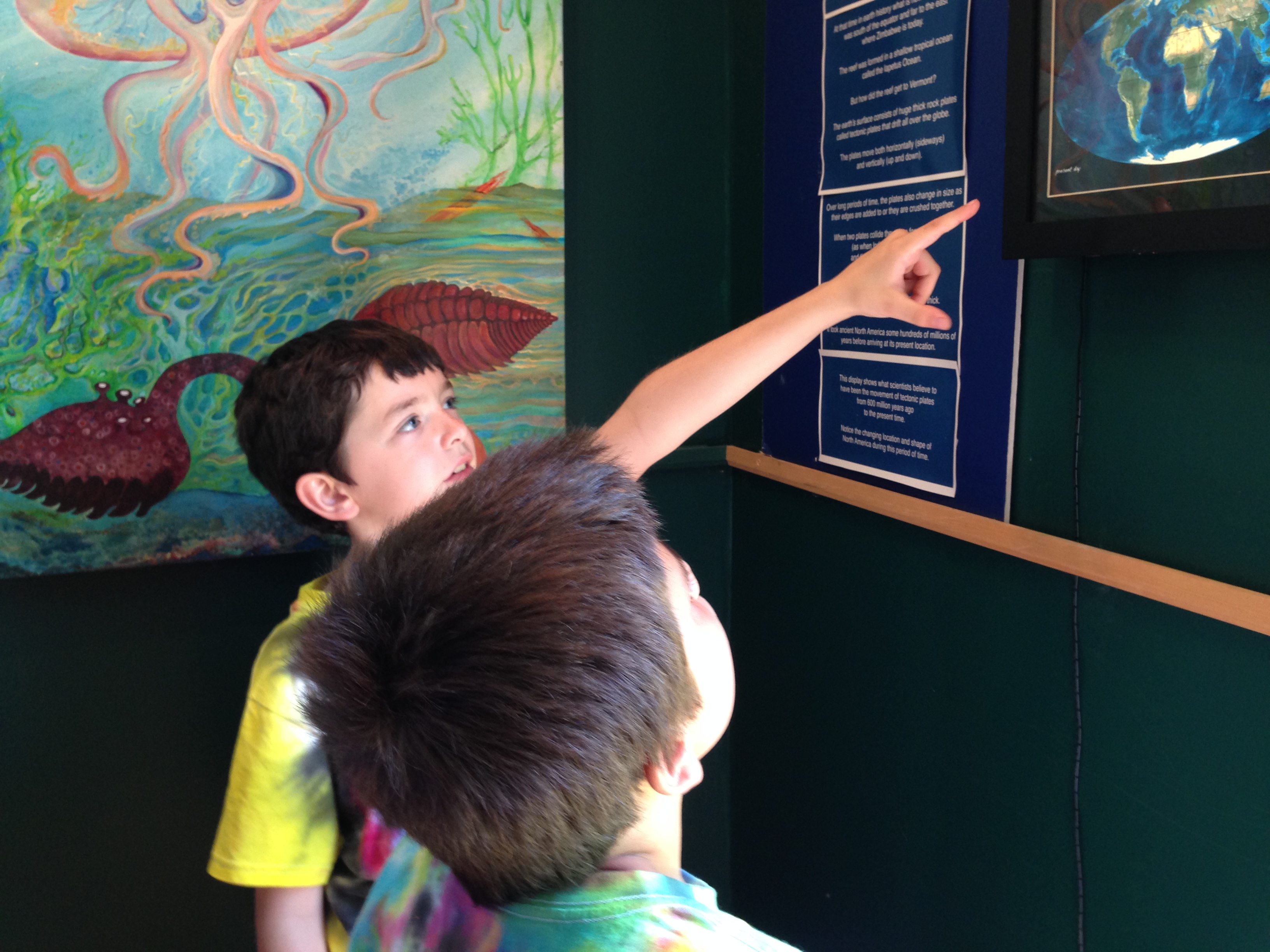 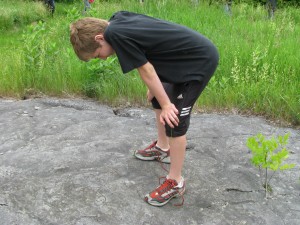 Finding Fossils in the Rock 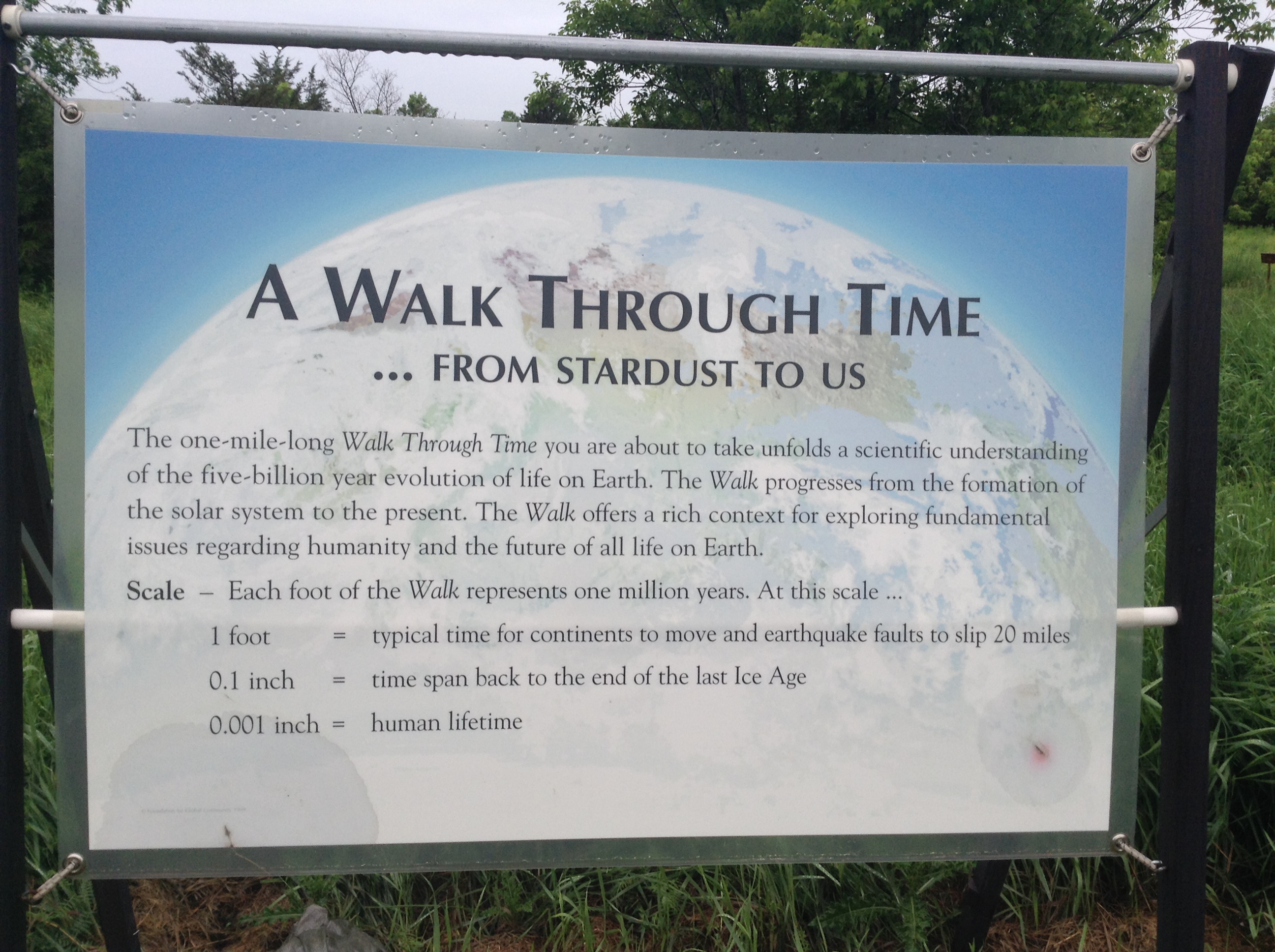 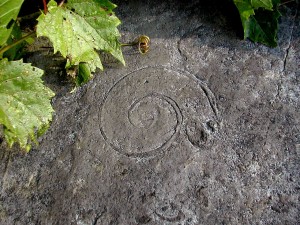 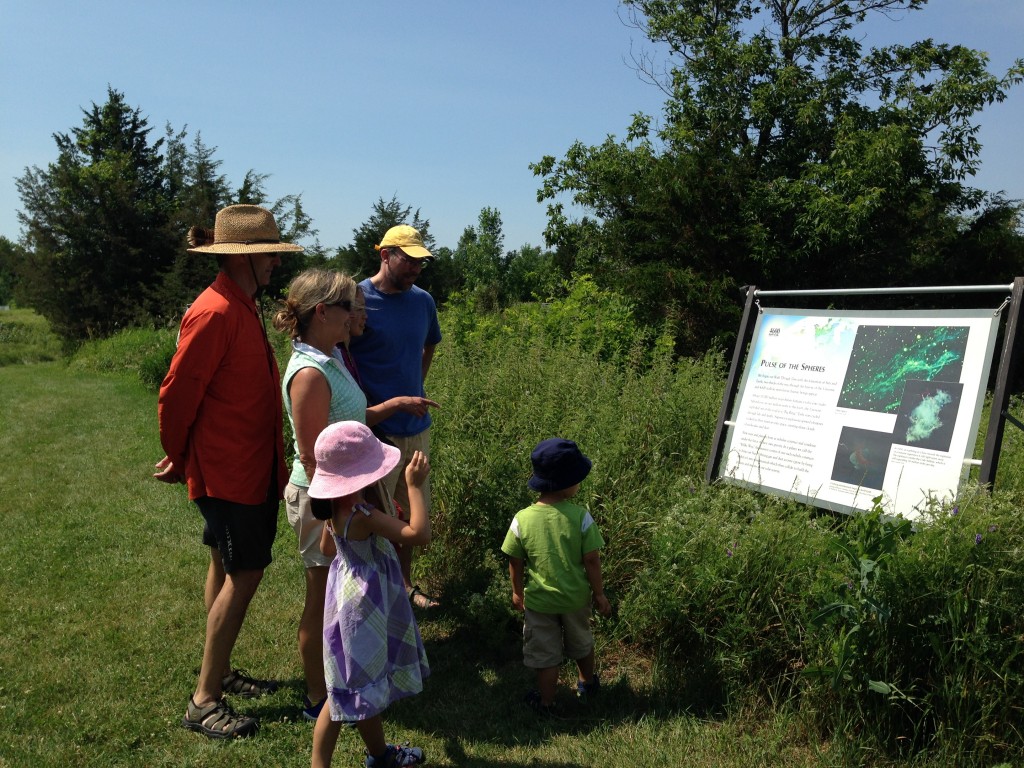 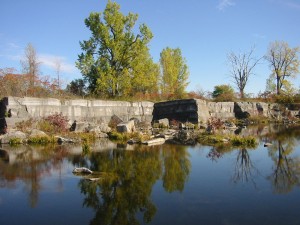 The Fisk Quarry was the first acquisition of the Isle La Motte Preservation Trust which took place in 1998 in partnership with the Preservation Trust of Vermont and has been a favorite destination for geologists for many years.  The rock is composed of the Chazy Fossil Reef, which is the bedrock of the entire southern third of Isle La Motte.  It is limestone, which, when polished, resembles marble.

The limestone (marketed as marble) was mined in six quarries on the island during the 19th and 20th centuries. The Fisk Quarry was the oldest of these, first mined by the French  in 1666 to make lime mortar for the construction of Fort St. Anne. Active throughout the 19th Century up until about 1919, it was then abandoned as it was no longer profitable.

In 1998 the old abandoned quarry was purchased by the Isle La Motte Preservation Trust and is now a preserve.   Fossils from the reef in ancient seas almost half a billion years ago can be seen in the walls and the floor of the quarry.

In all seasons visitors can


*park in the designated area along West Shore Road (south of Fisk Farm) and walk into the quarry.  Fossil remnants can be seen in the quarry floor, sometimes encircled in stones placed by previous visitors:

*walk 600 feet along the road to the north to a pedestrian path.  At the end of the path is a kiosk telling the geological, human, and ecological history of the quarry.  There is also a dramatic view of the Quarry pond and the fossil remains of stromatoporoids in the quarry walls.

As in the Goodsell Ridge Preserve, please help to protect the fossils as well as other rock formations, plants, and wild life. 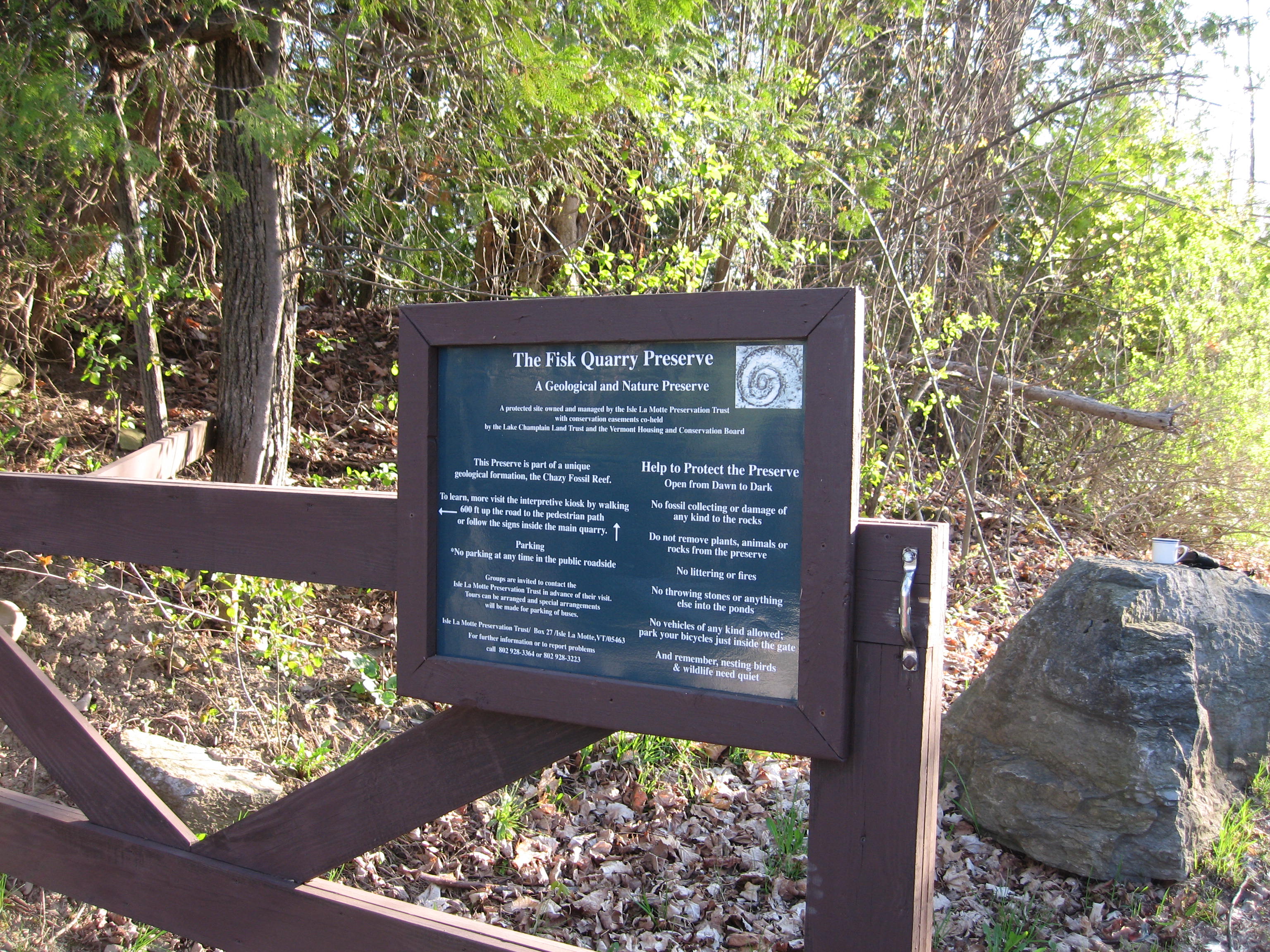 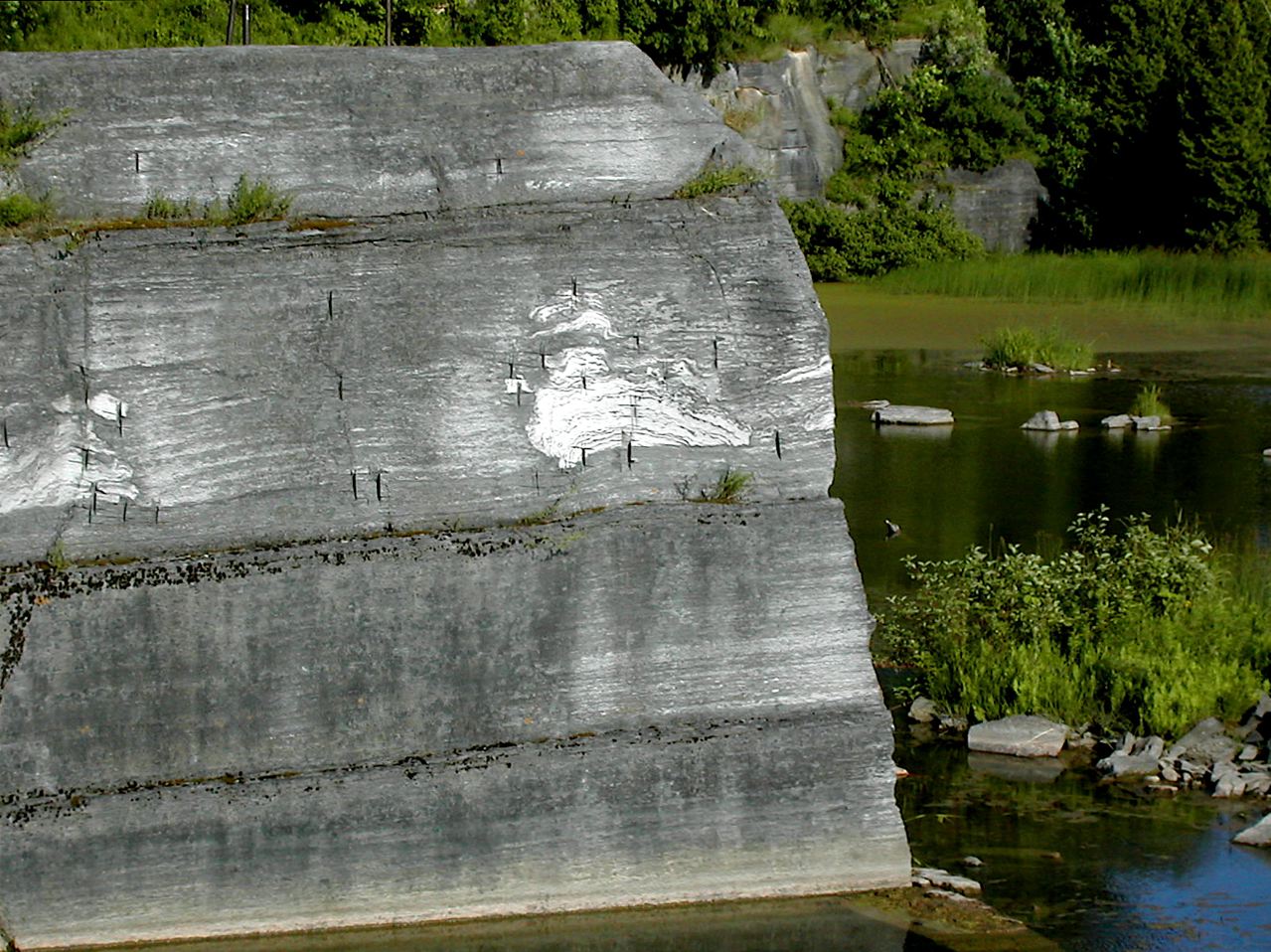 Fossil Stromatopoids in the quarry walls 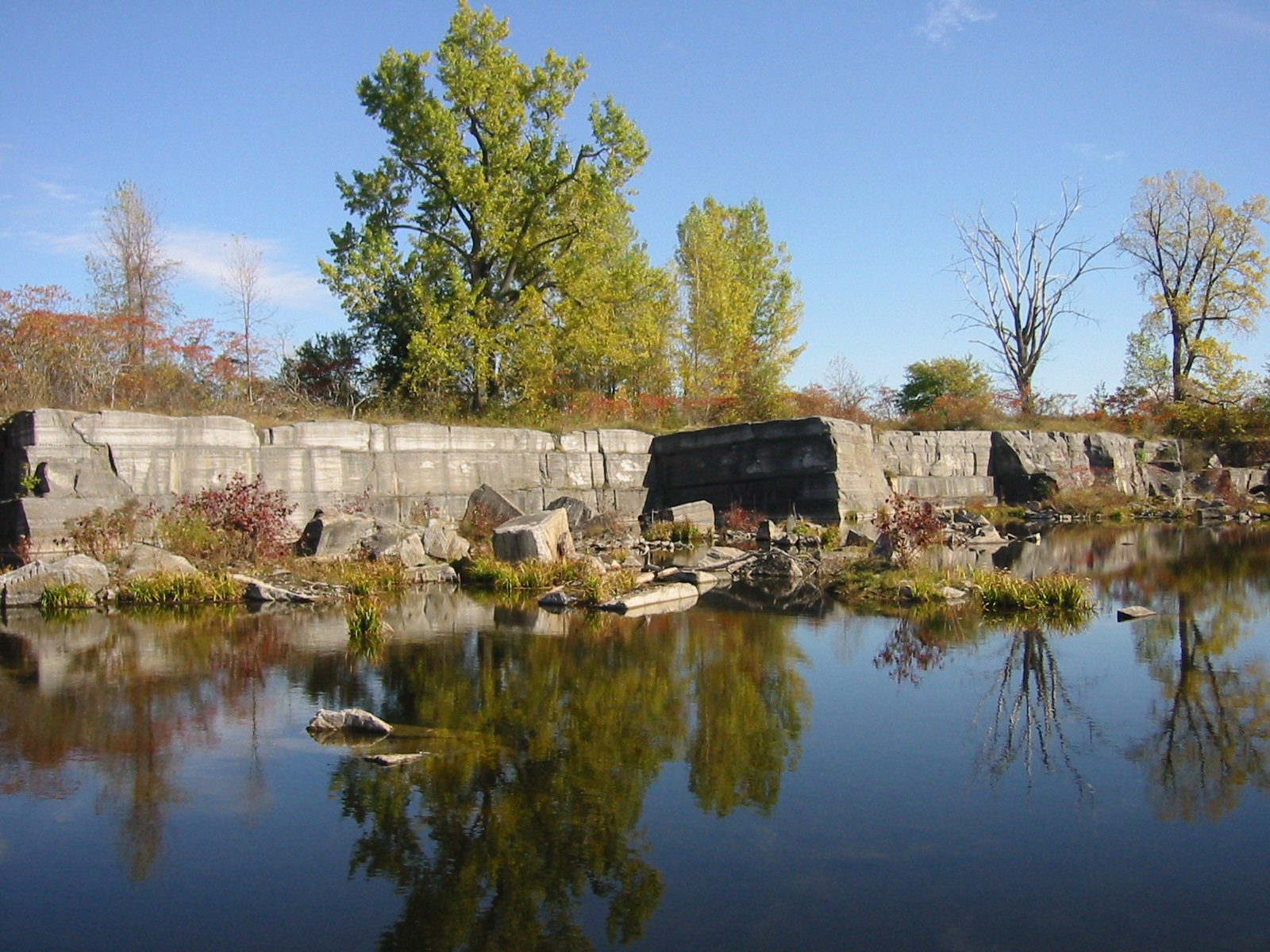 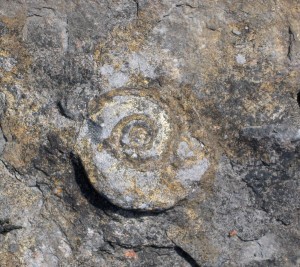 Fossil in the Quarry Floor

The Fisk Quarry As Habitat

Since quarrying ceased in the early twentieth century   ground and surface water formed a system of wetlands on the Fisk Quarry Preserve with ponds and marshes in the old quarry excavation and adjacent wet meadow and woodland areas.  Wetlands, like ancient and modern reefs, support an abundance of biological diversity and the Fisk Quarry Preserve is no exception.

“For a number of species, from plants to amphibians to birds and mammals, the cove-like aspect of the quarry provides shelter from the harsh wind and weather of the open lake.  In the several days that I was there I was able to do some naturalizing, looking at birds and wildlife, and even made a preliminary list of the birds I observed. The few observations I undertook convinced me that the potential for significant habitats is worth investigating.  The fact that there are  Great Blue and  Green-backed Herons as well as raptors and mink feeding in the quarry suggests to me that the quarry may also house healthy populations of prey groups such as amphibians and small mammals as well as aquatic insects.”
Dan Froelich, Naturalist 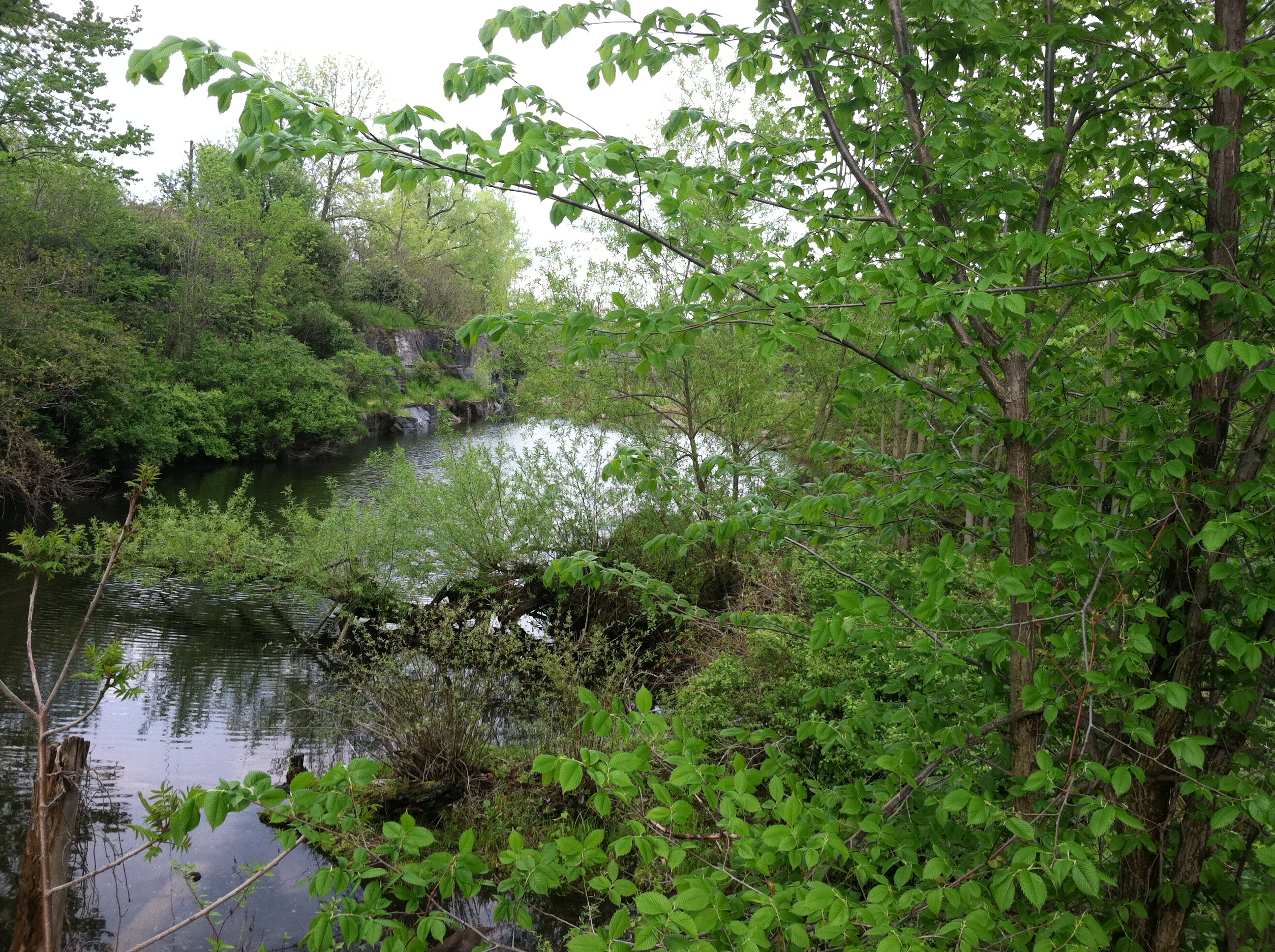 Beaver, muskrat, fish, turtles, salamanders, and a symphony of frogs have made homes in the old quarry. 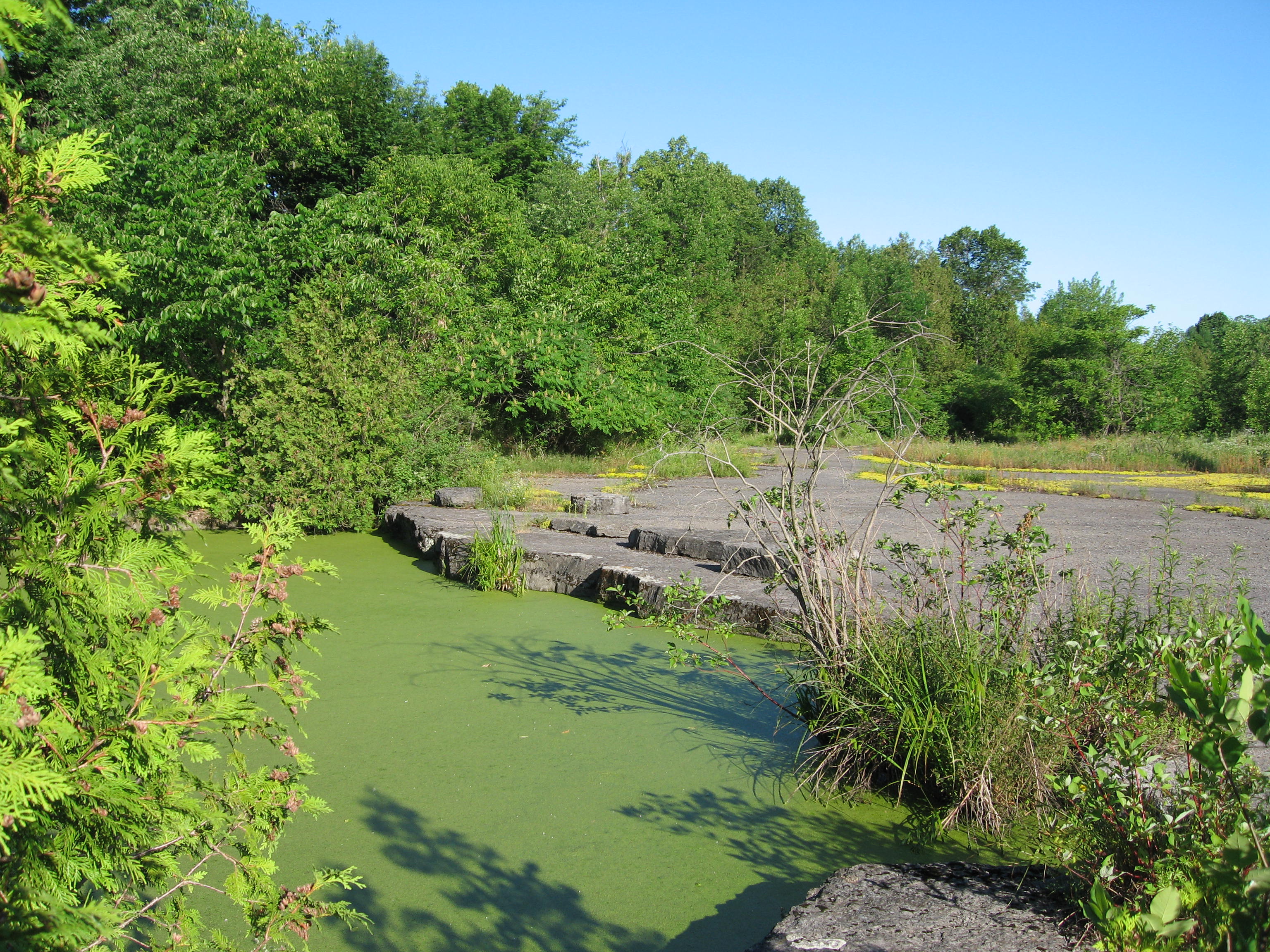 Turtle Pond has an almost constant cover of duckweed.